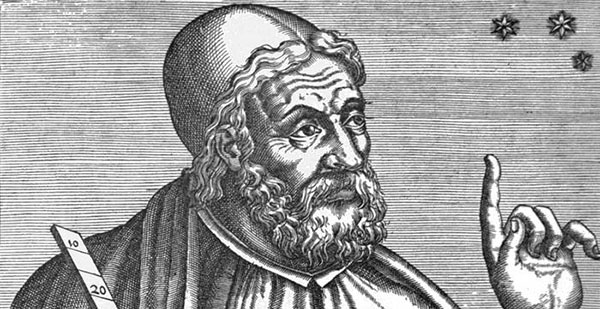 Around 140 AD, Claude Ptolemy (90-168 AD) took the theory of Hipparchus. He exposes in his Almagest the first empirical theory of the movement of the Moon. Ptolemy confirms while correcting the geocentric system of Aristotle. He considers that the Earth is surrounded by a series of crystal spheres - up to 50 spheres - on which the planets and the Sun are fixed. The outer sphere contains the fixed stars behind which is always the divine fire. All these spheres move uniformly in accordance with Greek metaphysics.
However, this conception does not correctly explain the sometimes aberrant movement of certain planets such as Mars, which retrograde for a few months before resuming its normal course among the stars. On the other hand, since the tables of lunar positions did not conform to observations as time progressed, Ptolemy invented the theory of epicycles. Each planet describes a circular orbit, the epicycle, centered on the main orbit, called the deferent. To explain the smallest variations in the trajectories of the planets, Ptolemy further improves his system and imagines that the centers of the deferents are themselves offset from the center of the Earth, following a circular path called the eccentric.
But philosophically speaking, the idea of ​​Ptolemy tarnishes the brightness of the Sun. All the Middle Ages are conservative, the Man is the center of the concerns while the Church sees angels everywhere - some push even the planets - a way of counteracting the mechanism and the Greek geometry.
We are going through a period of lethargy during which new ideas were duly combated by religious dogmas and prejudices. Things remained frozen for nearly a thousand years because the clergy refused the irrationality of mathematicians. Nature could not be tamed. This attitude was contrary to the divine essence, for which everything was order and aesthetic, Bible in support. The clergy also referred to the ancient conceptions of Plato and Aristotle, whose very enlightened genius was authoritative for a few centuries.